Biography
Jeff Kavanda is a singer and percussionist who lives in Belgium since 1994. As so many Congolese artists, he started singing in choirs. In Kinshasa, he performed as a singer in various bands, such as Laviniora, Defao's Big Star, Inama Mouzindo and Bobongo Star. After his arrival in Brussels, he continued and sung with Promuzika, Afro-Soukous, Nabindibo, Zap Mama and even Zaiko Langa Langa.

He also gave masterclasses in percussion and polyphonic singing, before he decided to create his own band, Lisano Ya Mbonda (playing the drums) in June 2000. The band, composed of musicians from Congo, Nigeria, Ghana and Belgium, offers a broad spectrum and afro-cuban, with influences from Central African and West African music as well as reggae and rap. The rhythmic foundation of his music is laid down by the balafon and various percussion instruments such as the congas, djembe, bongos, berimbo, darbouka and also the likembe. Modern instruments like guitar, bass, clarinet, piano and violin are added. The music is, unlike modern Congolese dance music from bands of the Wenge generation, inspired by traditional rhythms as well as influences from other countries. This makes Jeff Kavanda different from most fellow Congolese musicians.

A first album, « Le goût de la vie », was released in 2001. In July 2004, his second album « Tala Na Sima » came out, with twelve songs in a variety of styles. On his third album, « Tam-tams d'exil », Jeff is accompanied by Congolese star background singers Nana Akumu-Bolenge, Baniel Bambo and Fayila Boendi. The former two, Nana and Baniel have worked with the great Franco, just as the latter who has also worked with Bana OK. 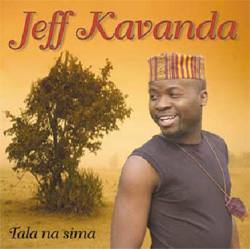