Biography
Samba Touré was born and grew up in a small village called Dabi, near the town of Niafunke, in the Tombouctou Region of Northern Mali. He was brought up solely by his mother, as his father passed away shortly before Samba's birth. From an early age, he was surrounded by music. His mother even sang with Ali Farka Touré at the Biennale Festival.

Grown up, Samba left his native region for Mali's capital Bamako, in order to find work. Here, he heard modern styles of African music, such as the Congolese dance music. It inspired him to start singing and playing guitar, and Samba joined the band Farafina Lolo. He became also familiar with the music of Ali Farka Touré, who was at the origin of what would later be called "desert blues". Samba started playing in Ali Farka's style. By the mid-1990s, Farafina Lolo split up and Samba continued with Super Lolo, but he would leave soon in order to focus on composing.

In 1997, Ali Farka Touré asked him to join him for a tour across Europe and the USA. This opportunity opened new perspectives and turned out to be very inspirational for Samba. In addition, the old master encouraged Samba to develop his own style. After the tour, Samba formed his own ensemble, called Fondo. In 2004, his first album, carrying the same title, « Fondo », was a huge success in Mali. Three years later, he released a second album, « Aïto ».

In 2008, Samba signed with World Music Network, and the next year, there was his first international album release, « Songhaï Blues: Homage to Ali Farka Touré », with songs from the first two albums. In 2010, he joined Toumani Diabaté on his Ali Farka Touré Variations Tour. In between, he recorded a new album, « Crocodile Blues », on which Samba develops his own signature. On this album, he sings in various Malian languages about the cultural diversity, stressing unity and peace for this country. He received a Tamani d'Or Award for the album, which was also in the Top 3 of the European World Music Charts. When recording his 2012 album « Albala », this national unity was severely put in danger, and somehow this reflects in the mood of the songs. There is an added gravity in his voice and lyrics, expressing his worries about the situation in the Northern part of Mali. 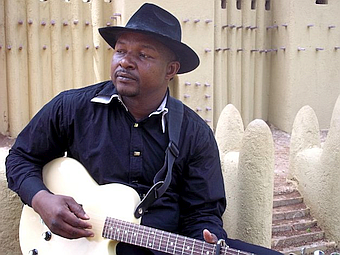