Biography
Adama Yalomba is a singer, composer, and instrumentalist (guitar, n'goni, dan). He learnt to play the dan from his father, Samandji Traoré. The dan is an instrument of 6 strings, each of them on a separate bracket, mounted to a calabash. It is played on public areas to welcome those who return from a stay abroad.

His musical education took 15 years, and brought about musical encounters with the Balazan de Segou and Bronkoni de Niono. In 1992, he left for Bamako and played with (among others) Hawa Dramé, Bakoroba Diabaté and Nanou Coul.
He recorded his first cassette in 1995, which was quite successful in Mali. Two other cassettes followed, one solo recording and one together with Awa Bako Diabaté. Finally, he recorded a solo album « M'Bora » in 2000 with Yves Wernert as producer, an album with 10 songs in various styles, but in a way following the lines of Issa Bagayogo and Habib Koite. Following the release, Adama has been touring extensively in Mali, but he also performed at the Rain Forest Festival in Malaysia in 2002 and in France (Tour de scènes 2004, Angers).

Adama Yalomba's music is featured on some samplers, such as Festival in the Desert and African Odyssey on Putumayo. In October 2004, he performed at the WOMEX congress in Germany. In summer 2007, he tours in France, Belgium, Ireland and the Netherlands. A long announced first international release, « Kassa », was finally released in 2009.

Christophe Barbe-Gayet has made a documentary short movie on Yalomba's Mali tour. 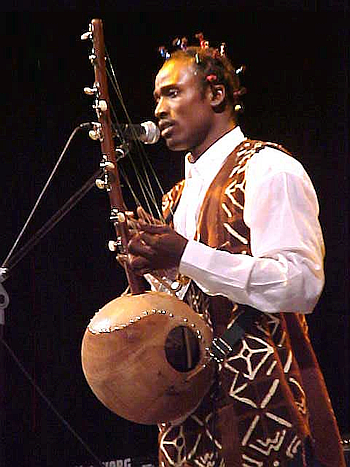