Biography
Mamoutou " Mangala " Camara was born in 1960 near the town of Kayes in the Western part of Mali. Not being born into a griot family, he was not supposed to sing, but Mangala, a nickname he received when he was a teenager, received blessings from a respected griot in order to sing without any problems. From the age of 8, he was always to be found near the Tambaoura Jazz, a local orchestra which he joined 4 years later. In 1980 and 1982, he performed at the Biennales du Mali with the Orchestre régionale de Kayes.

It was Salif Keita who asked him to join Les Ambassadeurs internationaux, where he became backing vocalist and drummer. Mangala gained experience and had the opportunity to travel and tour in 1985. At some point, he ended up in Paris, where he enjoyed the liberty which was so dear to him. Still in Bamako, Mangala and the Ambassadeurs had worked with Zaka Percussions, whose bass player Alain Lecointe and Mangala co-founded the band Donké. They released an album « Paris Bamako » (1988), which was remixed and re-released three years later by Island Records. In between, Mangala received the RFI Découvertes Award in 1986. 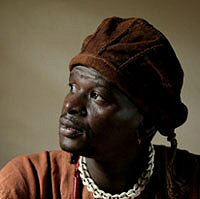 Mangala Camara
In 1993, a first solo album came out, « Complainte Mandingue Blues », followed by « Réexpedition », an album with a more international fusion approach.

In 2001, Mangala returned to Mali and, as he said, it's better to inspire yourself rooted in your home country than to get lost abroad. He recorded a more traditional album with Yakouba Sissoko on the kora and Lansine Kouyaté on the balafon. The album was called « Chants et Musiques de Griots » and was released in the well-known collection Air Mail Music. In 2006, he recorded a new album with Ibrahima Sylla of Syllart. This album, « Minye Minye » (I am what I am) was quite successful in Mali, and everyone recognised his talent. But Mangala was also criticised by many compatriots, mainly for the fact that he lived the way he wanted, no matter what others would say, which is rather unusual in Mali.
In the same year 2006, Mangala sang the majestic « Mali Sadio » on Toumani Diabate's album « Boulevard de l'Indépendance ».

In 2010, the song « Wililé » from Mangala's 2006 album was released in several remixes mainly by Boddhi Satva on Vega Records. In October 2010, he was to release a new album, but unfortunately he died on 29 September 2010. The album was eventually released in 2013 in Mali.