Biography
Ben Zabo was born in the town of Tominian, located East of Segou, in a region referred to as Bwatun, the land of the Bo people. In his native Bwa culture, being born into a noble family means that making music is not a natural thing to do. But Arouna Moussa Coulibaly, as Ben's real name is, was so passionate about music, that despite opposition from family and others, he made his first musical experiences at the age of 14, with François Koita, the leader of the Bwa Band, the local orchestra of Tominian. He stayed with this band until 1999, in that year he went to the capital Bamako in order to start his studies in pharmacy.

In 2000, he joined the band Kumba led by Binke Traoré, and he has participated in a few tours during a period of two years. Ben Zabo started to form his own group with friends mainly hailing from the Tominian area. He planned a first album in 2008 but the project didn't succeed. Instead, Ben Zabo enrolled at the Bamako Conservatory, not so much to improve his singing and guitar skills, but to become a sound engineer. It enabled him to become assistant sound engineer at the Bogolan Studio in 2007. In this studio, he met Peter Weber of Glitterhouse Records, who agreed to record his first international release.

In 2012, this international debut hit the market and the album received critical acclaim. Ben Zabo's music up-tempo music is a clear change from the subtle and more acoustic music we usually hear from Mali, especially in recent years. He admits having listened " too much " to Afro-beat. In any case, it seems obvious that Ben Zabo has listened to the classics such as Moussa Doumbia, Sorry Bamba, the Super Djata Band and Super Biton de Segou. The latter sometimes used Bwa idiom in their music, as the Bwa live in the region Segou. Yet, Ben Zabo is the first artist of Bo descent to have recorded an solo album ever. Primarily sung in Bomu, the Bo language, Ben Zabo's songs are about unity and social cohesion, tolerance as well as the cultural identity of the Bwa. Some songs of the album have inspired Mark Ernestus to create remixes. 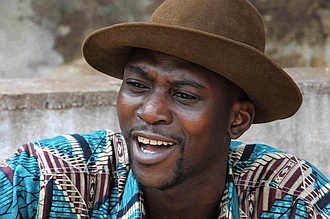