Biography
Super Biton de Segou was one of the great bands of Mali of the 1970s and 1980s. The origin of the band can be found in the creation of modern orchestra's and traditional ensembles representing the various regions of this vast country to compete during the Semaines Nationales, that would later become Biennales. The modern orchestra that was set up in the historic city of Segou turned out to be quite successful during the competitions. At the first Biennale in 1970 they won several prices as the Orchestre Régional de Segou.

The music of Super Biton is rhythmic and full of energy, as their music is inspired on bambara music rather than malinké griot music. Powerful singers such as Mamadou Percé Doumbia, Toussaint Siané and Papa Gaoussou Diarra (Papus), the guitar of Mama Sissoko and of course the horns of chef d'orchestre Amadou Bâ were the pillars below this strong band. Several albums were recorded and in 1986, an international tour brought them to Western Europe. By then, times had become difficult, financially, technically and artistically, and after the tour, chef d'orchestre Amadou Bâ left Super Biton. His departure would lead to a near-to-disintegration of Super Biton, with some members retiring from music, others seeking new adventures i.e. solo careers. For instance, singer Percé went to France and, although he made one or two solo albums, he does not seem active in the music business anymore.

Since 2008, however, Super Biton has reformed and this might be to some extent related to the yearly Festival sur le Niger, where they play every year as the closing act. Participating members are Mama Sissoko, Toussaint, Papus, Cubain and the oldest surviving member of the group Mamadou 'Coulou' Coulibaly, alongside newly recruited musicians. 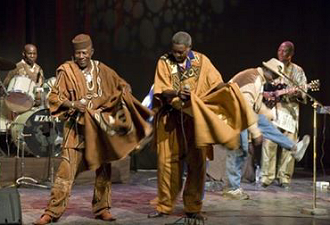