Biography
Sorry (or Sory) Bamba was born (and grew up) in Mopti, the regional centre in the inner delta of the Niger in the central part of Mali. Mopti is a commercial centre on the crossroads between the Niger valley where peul (Fulani) herdsmen and Bozo fishermen are living, but also close to the Dogon region. The Dogon have their distinct culture and beliefs, so different from those of their neighbours.
Born from Dioula and Peul (Fulani) parents, Sorry became orphan at young age. In multi-cultural Mopti, he learned to respect the various cultures living in the Mopti region, and he was enchanted by music soon.

In 1957, Sorry Bamba created his first band, Groupe Goumbé, named after the latest dance from Ivory Coast. After Mali's independence, the band evolved into Le Bani Jazz and already started modernising Malian music. Soon, Sorry Bamba was asked to lead the newly state created Orchestre Régionale de Mopti, with which he developed themes derived from the traditional music of the various ethnic groups of Mopti, the peul, songhai, bambara and the dogon. The group participated in national song contests at the Biennales, toured in West African neighbouring countries and in 1965, Sorry released a first single (45rpm). In Abidjan, he would release a few 45rpm's with Guinean guitarist Kanté Manfila. Years later, Sorry renamed the group into Le Kanaga, named after the famous Dogon mask. They won the award of Best Orchestra twice, and earned as a result the title of national orchestra.

His 1987 solo album « Le Tonnerre Dogon » is considered emblemic for his contribution to modern Malian music and his search for innovation. 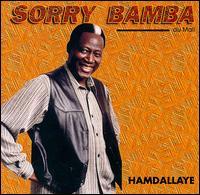