Biography
N'Gou Bagayoko has been known among insiders as the guitarist of Nahawa Doumbia. In fact, an encounter with a music teacher triggered his interest in guitar playing around 1970 when he was in his early twenties. He worked as a primary school teacher in Bougouni during the 1970s until 1988, but started his musical activities in 1980 accompanying Nahawa Doumbia who also just started singing.

He learnt playing guitar mainly by listening to the kamalen n'goni, a Malian instrument with 8 strings and a large calabash as a resonance box. The style he plays is inspired by the rhythm of the didadi, the music of Bougouni, and it is this combination of blues (kamalen n'goni) and swing (didadi) which makes his first album so attractive. The album consists of five instrumental songs and five songs accompanied by three female singers from the Wassoulou area, Nahawa Doumbia (his wife), Ramata Doussou Bagayoko (his daughter) and Maï Sanogo. The music is recorded in an intimate setting at N'Gou's house. The guitar has been put in the forefront, the voices are adding colour, and the sparse use of subsidiary instruments is stressing the lightness and transparency of the recordings. 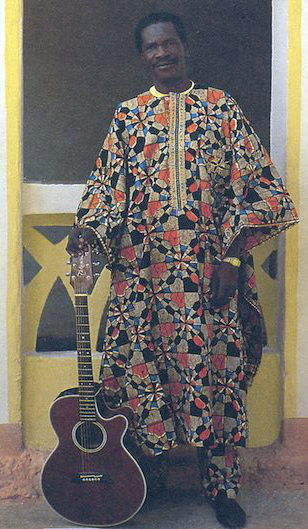