Biography
Mamady Keïta started playing percussion on his mother's kitchen pans, before he could even walk. As everyone in his village recognised his talent, his mother allowed him to learn to be a djembefola. At age of seven, he appeared in a movie with Harry Belafonte, Africa Dance.
In 1964, he was admitted to the National Ballet Djoliba, where he became artistic director in 1979. Seven years later, he travelled to Belgium, where he would live for many years, giving percussion lessons, and recording with his group Sewa Kan. He is generally seen as one of the best djembefola world-wide. 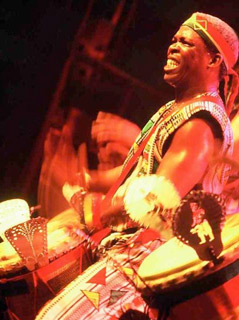