Biography
Elie Kamano started his career in music at very young age. He left school when he was fifteen years old and started to rap. He created his first rap group PNN (Positive Négro Natural), years later one of their songs featured on a first Guinean rap compilation album, together with established outfits such as Kill Point and Silatigui. Elie Kamano had plans and preferred to work on a solo basis, and he went to neighbouring Côte d'Ivoire where he hoped to embark on new projects. Life in Abidjan turned out to be very difficult and he lived in poverty, yet he succeeded to record an album « Entre deux frontières » that never made it to the Guinean marketplace. In 2000, he returned to Guinea and produced a single « Hommage à Cellou », a song about a friend who died tragically.

Elie decided to go to Senegal in order to record a song, he returned ruined, but with an album ready, « Lent et sûr », on which there was a song about Amadou Diallo, an innocent and unarmed Guinean who was brutally shot 19 times by four policemen In New York on 4 February 1999. This song, « Diallo, Diallo » was a huge success for Elie Kamano, and its reggae feel made Elie realise that reggae may be a better direction to pursue than rap.

The difficult years were over and Elie could concentrate on his career. In 2005, he released a new album, « Trafiquants », where his talent was sparred with featurings by well-known artists such as Tiken Jah Fakoly (on the title song), and by Les Espoirs de Coronthie on « Dounya ».

After recovering from a car accident in 2007, he returns with a new album « Où va l’Afrique » (2009). Once again he shows his political engagement and his anxiety about Guinean politics and society. In 2011, Elie was one of the finalists for the RFI Decouverte Award. 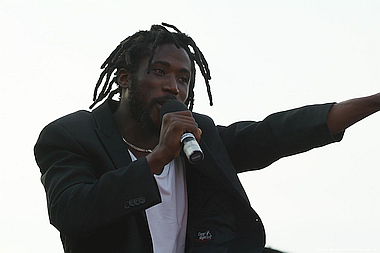