Biography
Extra Musica has been the major music band from Congo Brazzaville of the mid-1990s. They are making a modern, very danceable, soukous. Their first albums were the most successful ones, not only in their home country but throughout Africa. Under the leadership of drummer Ramatoulaye and guitarist Roga Roga, Extra Musica has been successful for many years and produced several albums. After a few years, problems of financial and managerial nature were felt by various members of the original band. After the departure of Guy Guy Fall in 1996, others left in 1998 to create off-shoots such as Extra Musica International in 1998 under the leadership of Quentin Mouyasko, with guitarist Arnaud Laguna. From Extra Musica International a further spinoff was created, Z1 International, led by Régis Touba, with Pinochet Thierry, Durell Loemba and Cyrille Malonga.

The original group under Roga's leadership changed its name into Extra Musica Zangul. After the 2001 album « Trop c'est trop », there was a long silence but a new album « Obligatoire » was released early 2004. Later that year, Doudou Copa decided to leave for a solo career, and in 2005, singer Oxygène decided to leave Extra Musica to create Universal Zangul. Oxygene's departure has been perceived as a heavy blow to the original band. Nevertheless, a new album was released in December 2006. After all departures, Roga Roga continues with Extra Musica, or what is left of it. 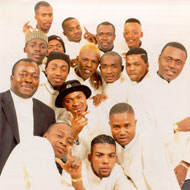