Biography
Woya has been created in 1984 in the town of Divo (West of Abidjan) by Marcelin Yacé and producer François Konian at the initiative of the mayor of Divo. Success came immediately, and soon Woya performed in the whole of Côte d'Ivoire and in the West African region. The band consisted of young people from rural areas. Most members were well under 20 years old at the time! For instance, Manou Gallo (bass) was 13 when she joined the band in 1985. Other members were David Tayorault, Marino, Tipo, Diby, and Tiane (Detchéké Christiane). The band became a super group within a year and toured extensively in West Africa from 1985 until 1987 with tremendous success. Their music, an international blend based on that specific Ivorian "fanfare"-like sound, was popular, and hits such as « Kacou Ananze » and « Chèque sans provision » could be heard on any West African radio in those years.

Then the band split, and Marcellin Yacé and Manou Gallo went to Abidjan. From 1993, Manou Gallo lived in the panafrican cultural village Ki-Yi-Mbock. Attempts were made to resurrect Woya on several occasions, first in 1990 and again at the end of that decade (1998). Apart from occasional performances in Abidjan, their new home, and a comeback album, there was no continuity and stability in the band's life. Finally, disaster struck in September 2002. Marcellin Yacé was shot in a crossfire during the upheavals in the country when he returned late at night from a concert. With his death, the future of the band has become now uncertain, especially because other members, like David Tayorault and Tiane had already decided to endeavour solo careers. David Tayorault is at the same time also a successful producer/arranger, responsible for, among others, the mixing of the album « Premier Gaou » by Magic System. 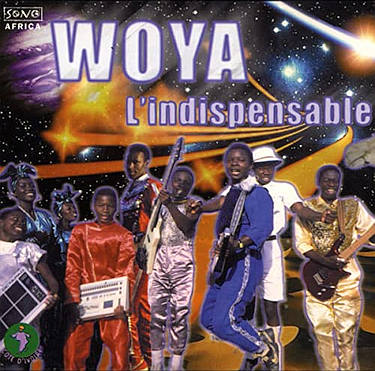