Biography
Manou Gallo was born in the small town of Divo and the day of her birth, her grand-grandmother died. Before she died she had a dream that Manou would be a gifted musician. Manou had an early preference for rhythm and as a child, she was always banging on pots and pans. When the drummer at a funeral ceremony doesn't show up, the 8 years old Manou climbs on a chair and starts playing the big Atombra talking drums. The villagers are shocked as women weren't supposed to touch these drums, but also because she played as if she was guided by the ancestors.

At age of 12, she participated in the Vacances-cultures, cultural holidays organised by the government. Whenever she performed, people were thrilled. One year later, in 1985, she was asked to join the group Woya to perform with them as a junior member. The band becomes a super group and toured extensively in West Africa from 1985 until 1989 with tremendous success. In the band, she found in Marcelin Yacé a musical father, and she got acquainted to modern instruments. Here she started playing the electric bass. When Woya breaks up, Manou follows Yacé to Abidjan and in 1993, she went living in the Pan-African cultural village Ki-Yi-M'Bock where she stayed for three years.
Through contacts she made during her stay in Ki-Yi-Mbock with Michel de Bock she was finally invited to become the bassist of Zap Mama, the afro-vocal group led by Marie Daulne, where Sally Nyolo also spent some time. In 1999, she performed once with Les Tambours de Brazza, and by that time she was well known in the European World Music Festivals scene.

In 2001, she set up her own band Le Djiboi, and in Brussels where she now lives, she starts to compose her own songs. Her debut album, « Dida », was released in Germany in 2003, and became be widely available throughout Europe in 2004. 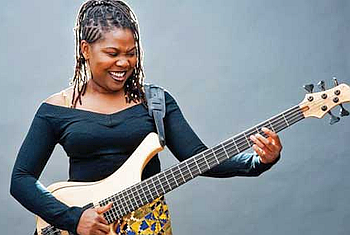