Biography
Victor Démé has been singing for 30 years, and throughout this time, he was struggling to get the recognition he was striving for. He learned to sing from his mother who was a griot who sang in the 1960s at various ceremonies such as weddings in the town of Bobo-Dioulasso. His father was a marka, an ethnic subgroup who are reputed as tailors in West Africa. Numerous family members were tailors, and Victor came to work in his father's workshop in Abidjan. In the evenings, he started to sing at small venues in the Ivorian capital, accompanied by several groups. The most famous of them was Abdoulaye Diabaté's Super Mandé.

In 1988, Victor returned to Burkina Faso. He was 26 years old and full of energy and he hoped to benefit from the cultural upheaval triggered by the president Thomas Sankara, himself a music fan. Sankara had been killed in 1987, but he had created various ways to promote cultural expression, and Victor Démé was able to conquer various contests, such as a talent contest at the French-Burkina Cultural center in 1989 in Bobo, and at the National Cultural Week in 1990. He was asked to sing with bands such as Echo de l'Africa and Suprême Comenba. Things turned harder and for a longer period Victor wasn't involved in music. When he wanted to come back, this turned out to be very difficult and he had to resort to work as a tailor again to earn a living, sometimes singing in a local bar where he had to sing covers of Salif Keita and Mory Kanté.

It was only in 2005 when he met Camille Louvel, manager of the Ouagajungle, an associative bar in Ouagadougou and in 2007, the label Chapa Blues Records was created to promote Victor Démé's music. In an improvised studio, two rooms separated by a truck wind screen, Victor started to work and recorded songs he had written over the years. Only in his mid-40s, he released his debut album, filled with a mix of folk, blues and mandingo melodies. 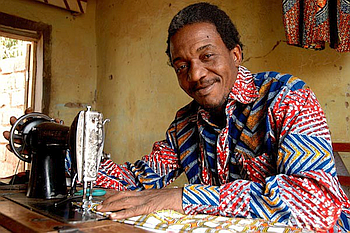