Biography
Chérif M'Baw (or Mbaw) is a singer, composer and acoustic guitar player from Ziguinchor, the capital of the Casamance region in the south of Senegal. Although it was foreseen that he would be a craftsmen like his father, he chose to be musician instead and despite all difficulties, he stood by this choice. After encouragements by Youssou N'Dour he was enrolled in a traditional music course at the Conservatory in Dakar and learnt to play the acoustic guitar at the same time. In 1994, he went to Paris for the first time for a contest organised by UNESCO. He came back to Paris a few times before settling permanently and made a living singing in the Parisian underground railway, accompanying himself with his guitar. His voice and talent have been recognised and he was asked to contribute a song on a sampler CD of subway musicians, titled « Correspondances », compiled in 2003 by the underground railway authority RATP. By then, he had already a record deal and a first album out.

This first album by Cherif, « Kham Kham », has been very well received, and is offering a mix of mbalax and folk, with tinges of flamenco, classical music and Indian music. There are guest appearances from Indian and Cuban musicians (Omar Sosa), and the song « Doomu Adama » is a refreshing duet with British singer Carmel McCourt. Cherif succeeded more than many others in mixing this variety of styles. 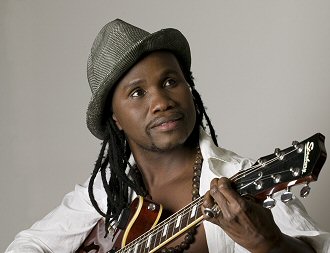 
Moreover, his crystal-clear voice, reminding of a younger Youssou N'Dour, and a poetic approach make the album convincing, remained distant from too much mainstream (afro-)pop, as the Senegalese background is remaining as a strong pillar. The mbalax, however, never becomes formatted or a cliché, and the solid musical training of Cherif M'Baw is paying back. « Kham Kham » has been a convincing debut. Cherif released two more albums, « Demain » in 2005, and « Sing For Me » in 2010.