Biography
Mansour Seck is internationally known as the long-time musical companion of Baaba Maal. He was a son of a Toucouleur (Haalpulaar) griot family, and since his childhood, he was a close friend of Baaba Maal. His learnt to play the traditional string instruments like the hoddu, but he preferred the guitar. In 1977, he co-founded together with Baaba and Mbassou Niang an ensemble for traditional music Yeli Taaré Fouta. It was during this time that Mansour taught Baaba Maal the griot musical heritage. The latter went then to Paris to finish his musical education and invited Mansour to come to Europe subsequently. In the 1980s, he recorded the legendary album « Djam Leelii » with Baaba Maal and he continues to work with Baaba when the latter started with his electric band Daande Lenol until the day of today.

Mansour's solo albums have the same peaceful ambiance as the Djam Leelii album, although the superb voice of Baaba Maal is sometimes missed. 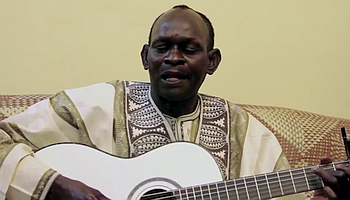