Biography
Djéour Cissokho comes from a family of griots that have served Mandingo kings during their conquest wars. Djéour is the son of the great Soundioulou Cissokho, who died in 1994 and who was known as the king of the kora and who had recorded a few albums with his wife Mahawa Kouyaté.

As all children of griots, Djéour Cissokho has learnt music since his dearest childhood both from his father and from his brothers. He grew up between Thiès, Dakar and the Casamance region, but in the evenings, the whole family was making music with Soundioulou. One day, Djéour took the kora and started to play, and his father sung with him. After a few years, Djéour started to be invited alone for to play at ceremonies. In 1990, he forms his own group Allalaké and he starts to create his own style. Based in Dakar, he made a few cassettes, resulting in the album « Unité ».

In 1999, he decided to open up new horizons by playing with foreign musicians, and settled in Paris. From 2002 onwards, he performs quite regularly in various Paris venues, as well as on several world music festivals. Two albums, the 2003 « Guisna » and the 2006 « Au fond de l'inconnu » show for an innovating approach, mixing traditional mandingo griot music with mbalax rhythms on the one hand, and influences of reggae, jazz and latin music on the other hand. 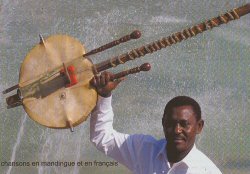 
On his album « Au fond de l'inconnu », recorded in Paris, he invited Super Etoile's keyboard player Moustapha Faye. In order to reach a larger (francphone) African public, he sings two songs in French (lyrics by Josée Lapeyrée), addressing modern day issue such as immigration and the danger of money.