Biography
Rachel Ratsizafy grew up listening to traditional Malagasy songs, pop music, Afro-American and African music. In the nineties, she performs with various bands, such as Zoukafri, an Afro-Caribbean trio, Pososhok, a South African and Cameroonian band with whom she ensures the first part of a tour of Salif Keita, and, Time-Mozam, a Mozambican group.

The following year, Rachel Ratsizafy records her first solo album « Natural Born Stranger », taking inspiration from her roots, the beautiful island of Madagascar. Rachel called on Olivier-Roman Garcia, a globe trotting arranger who is well acquainted with the music of the Indian Ocean. With Olivier, she wrote and composed most of the songs on the album, that was released in January 2008. Her voice is exceptional, the music is tinged with jazz, gospel and Rachel's Malagasy roots. 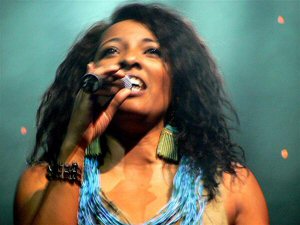