Biography
Wenge Tonya Tonya is one of the off-shoots of the Wenge family. The group has its origin in the defection in March 2001 by Adolphe Dominguez, one of the solo singer of Werrason's Wenge Musica Maison Mère. Dominguez, a gifted singer, was prominently present on Wenge Maison Mère's « Solola bien! » album.

Adolphe Dominguez is born from a religious family in the capital Kinshasa. He was infected with the music virus at young age and learned to sing as an autodidact, listening to classical music, but also to his neighbour who played guitar every evening. Dominguez becomes one of the lead singers of Wenge Musica in 1984.

On Tonya Tonya's debut album, « Affaire Tonya Tonya », he introduces a new dance, bawu na bawu, which he hopes will replace the ndombolo, at the end of its evolution. The album remained his biggest hit, even though Adolphe has released several albums since, notably « Mouna » (2002), « Suspension » (2010) and now « Intouchable ». He is, as many others, faced with the difficulty to find serious promoters willing to invest, and, related to this, the difficulty to keep his musicians happy and prevent them from leaving the band in search for other work opportunities. 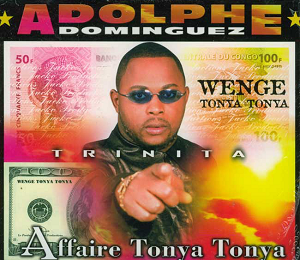