Biography
Lubumbashi Stars, unlike the countless bands based either in Kinshasa or in Europe, is a band formed in the second city of the Democratic Republic of Congo, Lubumbashi. A city of 1.8 million inhabitants, located in the very South East of the Democratic Republic of Congo, not far from the Zambian border, has always been of great geo-political and economic importance, notably because of the mining industry.

At some point, Lubumbashi Stars left their country for Zambia, and seemingly they stayed there for 3 years before moving on. In the mid-90s they were based in Zimbabwe. They made a rougher and more up-tempo blend of soukous, still referred to as rumba in most surrounding countries, where they were quite popular. They sing both in Lingala and in Swahili, and also musically, there are influences from Zimbabwe, Zambia, Kenya and Tanzania.

Unfortunately, the band disintegrated after the defection of several members. For instance, singer Dody Kaninda Mbala teamed up with Wellington 'Bitumba' Maruta. Lubumbashi Stars made three albums, all three are great dance albums, that are nowadays difficult to find. 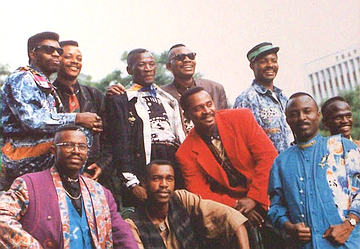