Biography
Bokelo Blito is a late starter in music. Born into a very musical family as his father was nobody else than Johnny Bokelo, one of the founding fathers of modern Congolese music who started with Paul Ebengo Dewayon in the 1950s before founding his own Conga Succès. Although recognised as an important exponent of Congolese music, Johnny Bokelo didn't want his children enter the music scene as he considered it to be a very difficult life. It was only after the death of Johnny Bokelo in 1995 that his son Blito Bokelo decided to go into music.

As his family left Congo to settle in Belgium in 1964, Blito grew up in Belgium, before leaving for Paris to study at the Sorbonne University, together with his twin brother. He didn't finish his law study as he wanted to work and be financially independent.

Since 1990, Blito lives in Nancy, in the East of France, where he found a job, before entering the world of music after the death of his father. Success did not come over night, but in 1998 he performed at the Festival des Révélations in Maisons-Neuves, where the public was convinced of his diverse repertoire of songs. One song of Blito, « Bébé » was released on the festival comopilation album.
By persevering, he finally found a producer, Alain de Ricou, with whom he signed a contract to re-record a panafrican classic « Amie Oh », composed by Cameroonian Ebanda Manfred and made famous by Bebe Manga in 1982. Bokelo Blito's version of the song came out in November 2004 on a CD single.

For 2005, Bokelo Blito was planning a musical encounter with various Congolese musicians and members of his family, as a homage to his father, Johnny Bokelo Isenge, 10 years after his death. Lokua Kanza, Papa Wemba and Kanda Bongo Man had agreed to participate in the project. 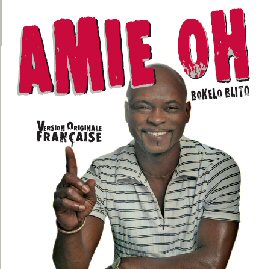