Biography
Djénéba & Fousco is a young couple that is representing a young African generation, with its hopes, dreams and strong belief in a better future.
Djénéba Kouyaté comes from a griot family with a long history in mastering the art of the djeli, combining knowledge of Malian history with preserving the musical heritage of the Mandé region. In 2010, she won a music contest on national TV, the « Tounkagouna ».
Fousseyni Sissoko, or Fousco in short, follows the lineage of singer-songwriters from the same region of Mali, called Khasso, in the West of Mali, with its main city Kayes. With his warm voice, and subtle guitar playing, his style reminds of Habib Koité or Boubacar 'Kar Kar' Traoré. Fousco won the same music contest, the « Tounkagouna » a year later and that is where he met Djénéba. They discovered that their voices were more than concordant and eventually they married in 2012.

In 2017, Djénéba & Fousco participated in the second season of the TV show l'Afrique a Un Incroyable Talent (Africa's got Talent), which was shown in various francophone countries in West Africa, where they made it to the semi-final. By then, things were set for a first album, « Kayeba Khasso », that was released in February 2018. On the album there is a mix of tradition and modernity, with songs about the suffering of migrants, about young people having a good time, but also a nostalgic song about their hometown Kayes, « Kayeba Khasso ». 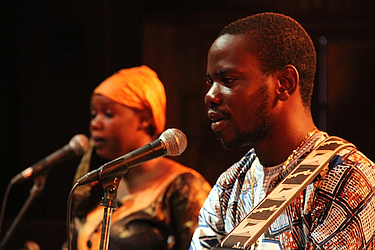