Biography
Bamba Wassoulou Groove is a group created in 2012 by Super Djata Band co-founder Bamba Dembelé, seeking a revival of the music of this mythic band of the 1970s and early 1980s. Bamba, a conga player himself, gathered young musicians around him, and asked Moussa Diabaté (guitar) and drummer Maguett Diop, both from Super Rail Band, to join.

In 2015, their debut album « Farima » has been released, with some new compositions, and a selection of great songs made famous by Zani Diabaté's Super Djata Band, for instance the driving « Siguigniossonfo » or « Batjila ». The song « Yacouba » is, during their concerts performed with all band members on their knees as a sign of respect for the former Super Djata icons, such as Zani, Flani Sangaré and Alou Fané who all are not among us anymore.

Singer Ousmane Diakité is doing a good job interpreting the songs that were sung by Daouda 'Flani' Sangaré and guitarist Bayni Diabaté is convincingly playing the dazzling line of the former master Zani Diabaté. Bamba Wassoulou Groove toured in Europe in 2015, and again in spring and summer 2016. 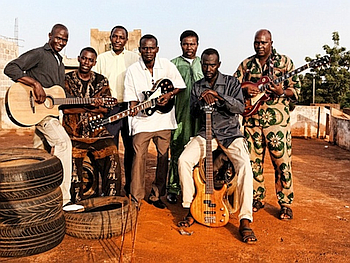