Biography
Les Sofas de Bamako is a group of young Malian musicians playing music of Malian inspiration, but on modern instruments. Different from other bands in Mali, their music is coloured by jazz, blues and brass, whilst their way of singing is so typically Malian.

When Dutch saxophonist Dick de Graaf heard them playing during a jam session in Bamako, he was struck by the melodic intensity and their rhythmic feel, and the members of Les Sofas were impressed by his music as well. This resulted in the end in a collaboration, a recording session in Salif Keita's Wanda studio. As the recordings were co-financed by the Dutch Embassy in Bamako, SNV Mali, Shell Mali and the Afrika-Studiecentrum (ASC in Leiden, the Netherlands), the band was given the opportunity to tour in the Netherlands twice, in 2000 and in 2001. The album « Djigui » was the result of the project. 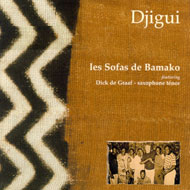