Biography
Filifin was born about 30 years ago in small village in the South West of Mali. His father played the kamelen n'goni, a rootsy lute similar to the dozon n'goni, the hunter's lute. The kamelen n'goni is a lute for young people, but the way it is played and the way it sounds is very similar to the hunter's lute which makes it sound very rootsy, but also very bluesy. It is sometimes called the traditional bass, replacing this instrument in traditional ensembles.

Brought to international attention by Issa Bagayogo, Filifin uses the kamelen n'goni rather as a solo instrument, as it originally was. On his first international album, he is only modestly being accompanied by the guitar of N'Gou Bagayoko. The viril and rootsy sound of the kamelen n'goni is being reinforced by Filifin's strong voice. This is as rootsy as blues can be, and as bluesy as roots music can get.
The album « Siran » has been recorded on location in Bougouni by producer Frédéric Galliano in January 2002.

Born: as Filifin Diakité, around 1972, in Mambouroula, a village in the South West Mali, near the Guinean border
Style: kamelen n'goni music from the wassoulou region 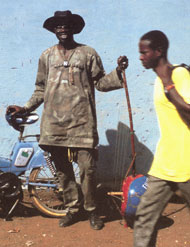