Biography
Fanga Fing is a rather loose ensemble that started under the name Black Authority. At first the group consisting of three rappers (Afroside, D Fresh and Djah Franco). later they became as Yeli Fuzzo joined them in 1998, but success did not come right away. They changed their name into Fanga Fing (which stands for black power) and they managed to participate in a Malian TV show on rap music. The show was a success and it enabled them in 1999 to release a first single, « Bamako City ».

In the meantime, Afroside had already left the group. Yeli Fu decided to set up a new label, specialised in rap and hip hop, Invasion Records. A first album, « Fanga Follo », came out in 2000 and was again successful. Artists such as Koko Dembelé and Djeneba Seck featured as guests participating each in one song of the album.

A silent period followed as Yeli Fuzzo was busy with producing the Invasion Records artists, and he was at the same time studying in the United States. Nevertheless, he made a solo album in 2003, « Je rap donc je suis » which was, again, very successful in Mali. In 2004, Fanga Fing started working on a new album that was finally released in 2017. 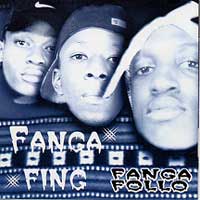