Biographie
Abdoulaye Diabaté started making music at a very young age by singing and playing drums at celebrations. Later he was member of theatre groups, which made music as well. By 1976, he joined the Orchestre Régionale de Ségou. He became known to the Malian public as the lead singer of Koulé Star from Koutiala and Kéné Star from Sikasso. The latter band won the first price of the 1986 and 1988 Biennales. Since 1988, he records albums in his own name, although at first still accompanied by some members of Kéné Star. Later, he engaged more family members in his group.

Abdoulaye Diabaté is now a well respected artist in Mali, but he is also increasingly successful internationally. On his latest album, « Samory », he is accompanied by a full band of electric and acoustic instruments, including balafon and various percussion instruments.

Note: there is another Abdoulaye Diabaté, born in Kela (and related to Kassemady Diabaté), who is a singer and guitar player, who has performed and recorded in North America. 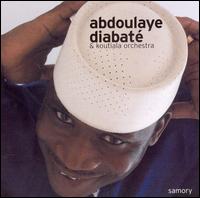