Biography
Sekou Kouyaté became well-known as a wizard of the electric kora, he was part of Ba Cissoko's group. It was actually at the age of 12 that he started electrifying the traditional kora, a 21-stringed West African harp, and he begins to experiment with fast riffs and distortion, inspired by funk and jazz music.

Sekou inherited the mastering of the kora from his father, M'Bady Kouyaté. He toured around the globe with his cousin Ba Cissoko, and to a lesser extent with his Conakry-based family band Section Kora. In recent years, it was the successful teaming up with American singer-songwriter, rapper and beatboxer Joe Driscoll that made Sekou well-known among the public. Driscoll and Kouyaté met in 2010 at a festival in Marseille (France). Despite (or maybe because of) the fact that the two come from totally different musical spheres, their presence on stage produce an explosive energy, and their first album together, « Faya », convinced both critics and the public. It is not often that such a cooperation is followed two years later by a second album, « Monistic Theory ».

In 2015, Sekou released a first solo album « Sabaru », on which he shows his talent as a kora player, but also as a singer. 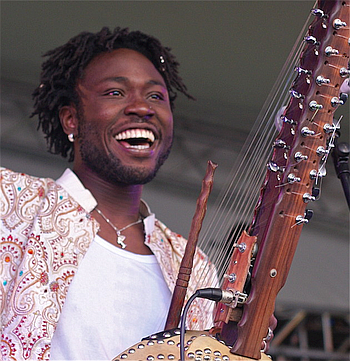