Biography
Kerfala Kanté was born a griot. Son of Soungarou Kemo Kanté and Yansana Kourouma, he started playing balafon since young age. When he was 15 years old, he took up the acoustic guitar and soon this instrument too had no secrets for him. He played at ceremonies such as weddings and christening parties.
His talent had been recognised and he joined the Tropical Djoli Band in 1980. During that period, he was successful with a song he had wrote, « Deni Kéléni ».

In 1984, he was asked to join one of the big orchestras, Balla et ses Balladins, created in the 1960s. Unfortunately, problems had already begun for this orchestra and lack of money prevented them from frequent performing. Kerfala's good contacts with Guinean radio RTG led eventually to the possibility to record a first cassette « L'Oiseau de Sankara ». Since then, he recorded more albums, and most of his albums were released on CD. Already in 1994, one of his early songs « N'Na Djanssama » was selected for the sampler « Electric & Acoustic Mali » as one of the two Guinean songs on this CD.

In July 2019, he fell ill and was hospitalised and after a short illness he died during the night between 18 and 19 July. 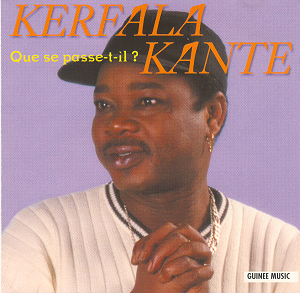