Biography
Prince Diabaté is an eminent kora player, hailing from a prominent mandingo griot family. At very young age, he learned to play kora from his father, Djéli Sori Diabaté who also taught Prince's mother, Hadja Djéli Sira Cissoko to play kora, which is quite unusual as according to tradition, the kora is to be played by men only.

Prince accompanied his parents during their performances, but soon he decided to make music his life, and in 1981, he won his first international contest in Abidjan. At that occasion, he acquired his nickname "prince de la kora".
In 1986, he met Amara Sanoh, a singer, with whom he started to perform. They made a first CD together, « Lamaranaa », that was released internationally in 1993, and was highly acclaimed. The duo eventually disbanded in 1998. Prince Diabaté pursues a solo career and releases an album « New Life » with many guest musicians. Based in Los Angeles, he has over the past years toured extensively in the United States, Canada, Africa and Europe. He is also often participating in fusion projects with musicians from other horizons.

Moving easily between the traditions of Mandingo music and modern fusion, Prince Diabaté has incorporated reggae, rap and blues into his work punctuated by the occasional, funky use of the wah-wah pedal. His latest album, however, is in a way a return to his sources. In 2005-2006, he went to Conakry to record the semi-acoustic album « Djerelon », with Kanté Manfila, Salif Keita's longtime collaborator as arranger and producer and Djessou Mory Kanté, Djekorya (Djekoria) Mory Kanté and Bakari Kanté on guitars.
The album is refreshing and well-recorded. As Banning Eyre puts it: "Diabate combines the acoustic approach American listeners favor, with the camaraderie and ambiance found only in Conakry to produce one of the most satisfying Guinean releases in a long time..." (www.afropop.org) 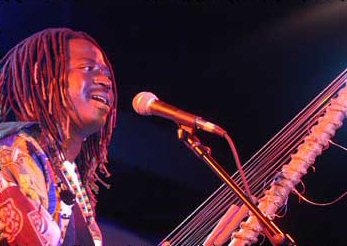