Biography
Sayon Bamba was born in Conakry in 1976, her mother was a pharmacist, her father was a pilot, who had worked for President Sekou Touré until he was put in jail by the same president. At that time, one could be arrested for a simple suspicion, but Sayon was brought up with liberty of speech, her family never denied her right to speak up. Moreover, in a country where national languages were promoted in education, she was send to the catholic sisters to learn French, as her father often repeated "in order to say what you think of the devil, you'll have to speak his language" (cf. www.jeuneafrique.com).

After her schooling (she studied science and mathematics), Sayon follows her passion for music and performing arts. She joins the Théâtre national d'enfants, followed by a short stay with the all-women band Amazones de Guinée. The Amazones is a band of the National Gendarmerie, and Sayon didn't want to become a Gendarme, so she eventually ends up in France. She settled in Marseille, where she meets with artists from a variety of horizons. Sayon fuses traditional music from Guinea with various mediterranean sounds, and produced a first album « Chansons des rues et des maquis » in 2005.
In 2008, a new album was released, with songs about issues such as increasing poverty in Guinea, corruption and social desintegration, but there are also joyful songs: as the album title « Mod'vakance » suggests, Sayon is in "holiday mode". Both on her albums and during live shows, the originality of the songs, Sayon's energy is showing both in singing and dancing, and the fusion of various music styles are quite enjoyable.

On her following 2010 album « Dougna », she didn't lose her combativeness as she sings about children at war, about people disconnected from their culture and about female genital mutilation, still perpetrated in parts of Africa. 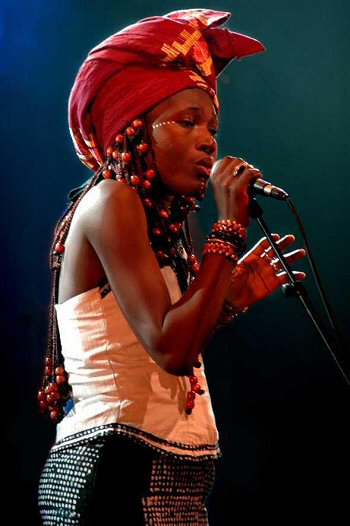