Biography
Les Amazones de Guinée are unique in various ways. Most of all because they are an all-women band, but also because typically all members are part of the Guinean « Gendarmerie ».
In existence since 1961, they used at first acoustic instruments, such as mandolin, various percussion instruments (bongos, congas), as well as violins. Around 1965, the band adopted electric guitars, saxophones and a drum kit. By that time, their name was changed into Les Amazones de Guinée, named after the all-women warriors of Fon king Béhanzin in Dahomey, present-day Benin, who even gave the French troops a hard time during the last decade of the 19th century.

Les Amazones performed in various African countries and represented Guinea at various occasions throughout the 1960s and 1970s, their highest achievement being their participation in the FESTAC festival in Lagos, Nigeria, in 1977. Only in 1983, they travelled to Paris for a concert, and a first album was recorded and released. Over the years, things became quiet around Les Amazones. Kade Diallo died in a car accident the same year as their French tour, and « La reine des Amazones », Nyépou Haba, died in 2004 after illness. Also Fatou Soumah is no longer among us, and others retired from the Army and thus from the Amazones.

In 2006, an old dream became true as the Amazones could record a new album, with a few new recruits, and the help of guest singers Fatou Nylon Barry (from the Ensemble Instrumental et Choral National), Aminata Kamissoko and the dancers-singers from Zawagui. It was the first album by Les Amazones in more than 20 years since their Paris concert and album. The new album was recorded in Bamako (studio Bogolan) and was met with positive critical reviews. 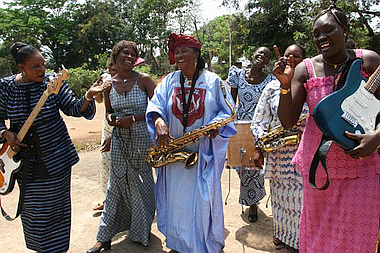