Biography
Fatou Linsan Barry has been one of the most popular Pular singers of Guinea in recent years. Along with other artists singing in the Pular language, such as Lega Bah, Binta Laaly Sow, Amadou Barry Accordeon, Petit Yero Bantinghel, Doura Barry, Maïmouna Barry and many others, Fatou Linsan imposed herself as an example for this style of music, so typical for Guinea. The music distinguishes itself from Malinké music by the use of the fula flute and by the specific rhythms.

Strangely enough, not much is written about her. She hails from the town of Linsan, hence her nickname, a small market town on the national road number one, between Kindia and Mamou. It is known as the place where travellers stop to buy some food or fruits before continuing to the Fouta Djallon region (or when returning to Conakry).

Her first album «Linsan », recorded with the help of Pamphile de Souza and Djékoria Mory Kanté, was an instant success and popular songs of the album such as « Nabhorèlan », « Danko Dewinà » and «Moura Bounga » are still played at parties.
A second album «Bounga Lèdjö », recorded at the famous JBZ studio in Abidjan encountered nearly the same public acclaim. She is starting to be invited by Guineans abroad to perform for Guineans living in the diaspora. In 2005 she was nominated for the Djembe d'or awards in Conakry for the category "best clip".

In February 2018, she died after a short illness, she just had finished a tour that brought her to Canada. Her daughter Beby Linsan, a singer herself, also died in October 2020. 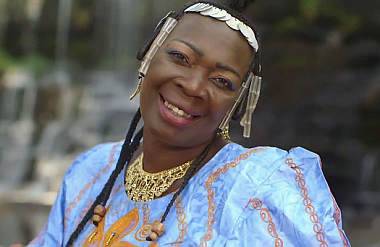