Biography
Ismaël Wonder, or Issimaïla Cisse which is his real name, is a young artist from Sakassou, the village of Queen Abla Pokou. Already at young age, Ismaël loved music and especially reggae music, because he estimated reggae to emanate African wisdom. As a teenager, he started making music and in 1991, against the will of his parents, he went to Abidjan to try his luck. Not without success as he recorded a first reggae album « Générations » in 1993. One of the songs of that album, « Ka Ben Kèlè Man », a song advocating the understanding between people, brought him in contact with Amadou Toumani Touré, who brought democracy to Mali and who became again president of Mali in 2002. The meeting with ATT triggered Ismael's profound fascination for Malian culture and traditions.

In 1996, he released a second album « Tchè té mousso té » (neither man nor woman) where he comments in a humourous way his androgyne appearance, apparently sometimes leading to confusion. He toured in Côte d'Ivoire, Burkina Faso and Mali to promote the album and during this tour he met a producer who invited him to France to record « Toubi » on which Ismael mixes for the first time reggae and traditional African melodies. In Paris, he starts playing the guitar and in 2004, he teams up with a group of musicians with who he recorded his album « Pharaon ». On the album, released in May 2005, he uses traditional instruments such as ngoni, tamani, Guinean flute and djembe along with modern instruments. The songs are inspired on the musical heritage of Mali, Guinea and Côte d'Ivoire. In late 2009, he released another album, « S.O.S. », mainly available as a download. 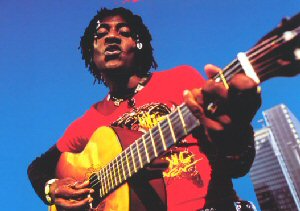