Biography
Abakuya is a group created by François Essindi, musician and story teller, and James (Jimi) Sofo, Australian globe-trotter who plays electro-acoustic bass. The two met in Cameroon in 2006, thanks to an exchange travel organized by the Akiba Foundation.

François Essindi was born on the 3rd of March 1970 in the Central Province of Cameroon. He made fame through his percussion, and as a true multi-talent he became a frontrunner of a new wave of local artists and singers in Cameroon, who wish to bring percussion and traditional instruments such as the mvet back on the scene. For a long time, these instruments were nearly forgotten in the music industry of Cameroon. In 1995, back in Cameroon, he started Otoulbaka together with Etienne Olangué, a band mixing the rhythms of his region with modern African music themes. Joined by jazz drummer and percussionist Guy Nwogang, they participated in the MASA 1997 festival in Abidjan. Nowadays, the band is in France, where they made an album. Essindi also worked with Donny Elwood, both as an instrumentalist and as a composer.

Now based in France, he started to perform as a solo artist, as a story teller, playing a variety of instruments, from the mvet (African stick zither from the Fang-Beti people), the Ngomo (traditional harp), to snail shells, the sanza, pygmy flute and various percussion instruments.

Abakuya performs since 2006 on festivals in Europe, and in 2008, a first album came out. Looking for more concert opportunities, François Essindi is ready to perform as a solo artist, or as Abakuya in various settings (as a duo, trio or as a bigger group). In all settings, the music is a result of his quest for the rehabilitation of traditional polyphonic music from central Africa. 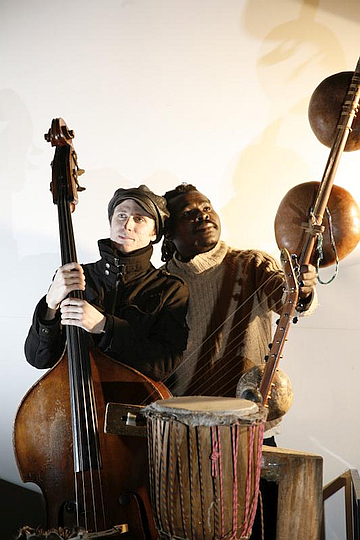