Biography
Donny Elwood (his English sounding name is a contraction of his real name Albert Dieudonné Ella Owoudou), is a remarkable artist in Cameroon. His songs are reflective, in poignant French, and sometimes solely accompanied by his guitar. Elwood is rather a chansonnier than a dance floor star, and he sings of daily life and misery of the people, with humourful lyrics. In a way, Elwood follows the tradition of Francis Bebey.

Whereas on his first album, he is more of a singer-songwriter, mainly accompanying himself on guitar, the second album shows a new facet of Donny Elwood, as a composer, and his lyrics are being supported by rhythms such as makossa, bikutsi and blues. On his albums, Donny Elwood has been working with the young Cameroonian guitarist Jay Lou Ava.

Donny Elwood, who is Beti, but has grandparents that were pygmies, had the talent to entertain the public. He was playing comedies before starting making music, but soon after doing so, he was voted Artist of the Year 1996 in Cameroon. He was also nominated for the Kora Awards.

Since 2013, he is said to finalise a third album, « Offertorium », but the absence of distribution structures, and the overall threat of discographic piracy in Cameroon made it impossible to release his latest album thus far. 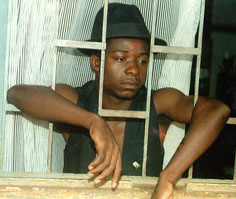