Biography
Zélé le Bombardier is a artist who became famous in in the capital of Cameroon in the years 1995-96, when the pedalé danse within Bikutsi music becamer very hot. Zélé has since then grown to one of the best bikutsi singers, with his recognisable voice, and he was surrounded by gifted musicians such as Roger Mvondo on solo guitar, Obalbass and Kempess on rhythm guitar, and Atebass and Sossu on bass.

Bikutsi music stems from the forest region in Central Cameroon, and is extremely rhythmic and far less melodic. Modern bikutsi is played with solo guitar, rhythm guitar and bass, where the guitars are so characteristically tuned in order to imitate the balafon, which gives bikutsi its "rootsy" feel.
Bikutsi has been made famous by Les Têtes Brûlées in the 1980s, and Zélé's style is in fact very close to that of Les Têtes Brûlées. The rhythm is hot, and the dancing is as well: at first hearing, bikutsi music sounds unusual, but as soon as you see people dancing you'll know what it's about! 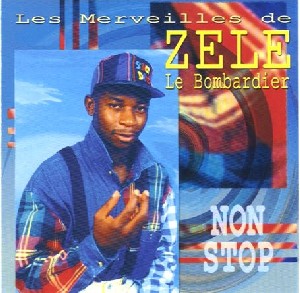