Biography
Sergeo Polo continues to defend makossa music by trying to modernise the music with the zingué makossa, through the introduction Congolese influences. But that is not his only quality. His songs are well written and his vocal abilities are far superior compared to some of his fellow present-day makossa exponents. Before going solo, Sergeo Polo has been a singer in Petit Pays' group Les Sans Visas, and his first album was a duo with Njohreur, also a former lead singer of Les Sans Visas. The title song of that album, « Le mari d'autrui » has been a big hit at the time. After a few reasonably successful solo albums, Sergeo tried his luck again by recording an album together with another makossa singer, this time Guy Lobé.

With his 2003 album « La chicotte de Papa » he has been voted "artiste de l'année 2003" in Cameroon. On the album he was assisted by well-known Cameroonian musicians like Aladji Touré, Manulo, Guy Nsangue, Valerie Belinga and others. On one song, « Pardonne-moi », he sings in duet with Charlotte Dipanda.
Sergeo Polo can be seen as one of the most talented makossa stars of a younger generation in Cameroon. 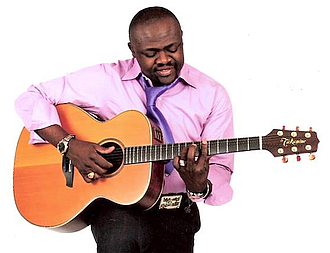