Biography
The Golden Sounds originate from the Orchestra of the Republican Guard of Cameroon's Presidency. Four gendarmes, Guy Dooh, Ze Bella, Luc Eyebe and Emile Kojidie, all members of this orchestra, created an comic act based on their military background. Dressed in military clothes, stuffing their clothes with pillows to suggest big bellies (meaning: eating well) and big butts (from long train journeys), they were particularly successful with the song « Zangalewa » (meaning 'who has sent you' in Fang language or 'who called for him?' in Ewondo language, referring to foreign African recruits who were complaining during military training). The song was apparently used by military in Cameroon and Nigeria well before the Golden Sounds transformed into a hit. They were helped by probably one of the first Cameroonian video clips that would appear frequently on the then still very young CRTV television station.

The song became not only a big hit in Cameroon but became known throughout Africa and even beyond, especially in Colombia. Another song from the same album, « Maladie difficile », was sung by a young singer that was added to the band, Annie Anzouer. She was one of two civilians along with Robert Kero. A few albums were made but the success did not remain. Along with concerts, band members occasionally engaged in solo projects. In 1993, Annie Anzouer left to concentrate on a solo career. Annie Anzouer was replaced by Viviane Etienne. The band has in the meantime adopted Zangalewa as band name because it was more known by the general public, also the distinguish itself from the Orchestre de la Garde Présidentielle which used the same name Golden Sounds.

In 2002, Ze Bella retired from the Army and Emile Kojidie exiled to the West. It was only in 2010 that Zangalewa became world news as Shakira's anthem for the FIFA World Championship in South Africa, « Waka Waka (This Time's for Africa) » was soon recognised as plagiarism, or at least partly. Weary of negative publicity Sony Music and the FIFA decided to credit the Golden Sounds and talks were initiated for some form of financial compensation. 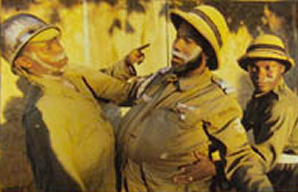