Biography
Gesse Roy is a reggae artist from the North of Cameroon, a culturally very rich region, but rather underdeveloped in the music business. Apart from Ali Baba and the band Faadah Kawtal, most artists and bands only reach regional fame such as Djamtobo, Bamba System, Tchidal or Peul singers Babba Sadou and Rougaya who both enjoy some exposure on Youtube.

Born in the Far-North Province (Extrême-Nord), he enrolled secondary school, first in Guider and later in Garoua, the capital of the North Province. He wrote poems when he was at college, and he became the singer of the school band of the Lycée Classique de Garoua, where he interpreted songs of Bob Marley. It was met with considerable success, and it encouraged him to go further in music, while pursuing his studies in telecommunications.

In 1991, when he was studying in Germany, he formed his band Gesse Roy and the Vibrations. It was with the help of German friends and sound engineers that his albums were produced. He created his own label, Reggae Fabrik. Although his first album met only limited success, his second album « Exorcist » made him known more widely, at least in the North of Cameroon. Gesse Roy chose his own path, he is the only one to have a web site of his own. He now lives in Douala. 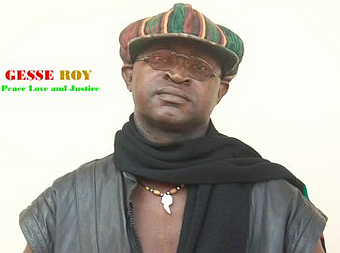