Biography
Bil Aka Kora may sound like a far-fetched artist name, but it is really a shorter version of his birth name Bilgho Akaramata Kora. He was one of the 17 children of Mahama and Teoura Bilgho and he was born in the town of Pô, not far from the Ghanaian border, as a member of the Kassena, a minority sub-group of the Gourounsi ethnic group. When he was an adolescent, he was part of a high school band called Les Missiles. Later, he went to University, but he dropped out after his second year because of lack of funding to continue his studies. He had then to turn to his music to earn a living and started to perform in bars and nightclubs.

When the Minister of Culture organises the Grands Prix nationaux for the first time in 1997, Bil participates and won the first price in the category Modern Song. It was the starting point of his career and a year later, the first album « Douatou », (rainmaker in Kassena language), was released. Bil Aka Kora continues to perform and record albums on a regular basis, and not without success. He received the Kunde d'Or price for his second album in 2002, and another Kunde d'Or in 2005 for « Dibayagui », his third album.

His fourth album « Yaaba » has been recording with the great multi-talent Ray Lema, with whom Bil had already been in contact since 2002. The album was aiming at a larger audience also outside of Burkina. Now, another album « Vessaba » has been released.

Bil Aka Kora makes a modernised version of Djongo, based on traditional music used for ceremonies where men show their strength and vitality to the girls, by fusing it with modern musical styles such as jazz, reggae and blues. He sings in French, English, Mooré and Kassena, a language spoken by about 1% of the population of Burkina Faso. He is one of few musicians in his county having his own band, the Djongo System. He has his own label and recording studio, Djongo Diffusion, where he also help young artists to jumpstart their career. 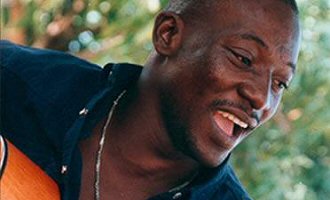