Biography
Pape Diouf grew up in a popular neighbourhood of Senegal's capital Dakar, called Parcelles assainies, where he lived with his uncle. He was learning to become plumber, but in his spare time, he was busy with making music. He joined the group le Mbollo of another neighbourhood of Dakar, Patte d'oie Builders. In 1995, he joined Lemzo Diamono led by Lamine Faye. With Lemzo Diamono, he worked on two albums and one live album, and he was responsible for their hit « Cocorico ». Pape Diouf stays with the band until 1998, and he subsequently returned to his older activity of plumbing.

In 2001 he came across Jimmy Mbaye from Super Etoile de Dakar, who helps him to record a first song « Joggël Daggu », and introduces him to the Jololi label. The following year he released a self-produced album « Live au Biddew ». With other Senegalese artists, he participates in a series of shows in the United States.

In 2004, he comes back with a new album, « Partir! », the title song is a cover of Andrea Bocelli's « Con te partirò ». This hit established definitively his name in the Senegalese music scene. More albums followed, such as « Jotna » (1998) and « Casse Casse » (2011) with a massive hit « Begué ». A fourth album « Ràkkaaju » was released in 2014. Pape Diouf is generally seen as a huge talent and often referred to as the new Youssou Ndour. 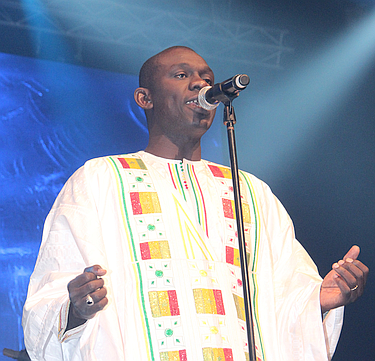