Biography
Daby Baldé was born in Kolda, in the Fouladou part of the Casamance. The Casamance is a culturally, ethnically and religiously rich and varied region, in an isolated position between The Gambia and Guinee-Bissau. The Fouladou is the central part of Casamance, that is in majority populated by the Peuls (Fula).
Moutarou 'Daby' didn't get a musical upbringing as his father was working for the postal services and anyway, being born into a noble family, he wasn't supposed to sing at all. But at the age of 11, he already sung and composed folkloric songs for various ceremonies. His family was opposed to a further musical career, so in 1987, Daby left school and went to Guinea for six months, followed by a period of six years in The Gambia. While working as a taxi driver, he was gathering various contacts to help him further in fulfilling his dreams. Thus, he was put in contact with Allison Claire Burden, a VSO teacher, who helped via other friends to get him a guitar and guitar lessons.

In 1994, he went back to his home town where had an audition with the Kolda Regional Orchestra. He subsequently worked with the orchestra as a lead vocalist for a period of nine months. Encouraged by the success they met, he travelled to Dakar and he started to perform both in Dakar and Kolda. After a large concert organised by Belgian NGO Vredeseilanden he eventually received an invitation to perform at two festivals in Belgium, the Flanders Ethno-festival and the Dranouter Festival.

Inspired by his many travels and by his cultural roots in the Fouladou region, he sings in various languages, apart from his native pular, also in wolof and mandinka. He sings about peace, brotherhood and social justice, but also abouth faith in God and about maintaining African values. Although he lives in Dakar, where he performs on a regular basis in venues such as Just4U and the French Cultural Center, he periodically leaves for Kolda to participate in local festivals and events.
His album on the Introducing label, recorded between Senegal and Belgium, offers a variety of songs, rich in melodies, with expressive vocals, and intriguing arrangements. 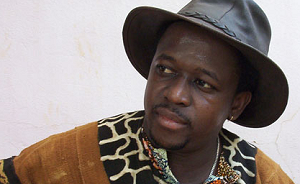 Born: 26 April 1969 in the city of Kolda, Fouladou (region of the Casamance), as Moutarou Baldé
Style: mbalax, afro-jazz, blues