Biography
Pascal 'Keno' Diatta was a singer and guitar player from the Balanta people living in Guinée Bissau and partly in the Casamance region (South Senegal), close to the border with Guinée Bissau. He grew up as an orphan, and got interested in the guitar, but poverty forced him to build one himself [3]. Over the years, he has developed a very distinct way of guitar playing, uncomparable to any other West African guitarists. He sang together with his wife Sona Mané, who followed the same rhythm and tempo changes as Pascal's guitar.

In 1983, Kimberly Safford travelled throughout West Africa in order to record music, and she recorded six songs by Pascal Diatta & Sona Mané in their home in Ziguinchor, using a Sony Walkman and a Sennheiser microphone [1]. The music was released by Lyrichord.
In a similar mobile recording setting, another session was done in 1988 by the team of Rogue Records. Compared to earlier music, where Pascal played guitar to Sona Mané's vocal efforts, on this album Pascal's voice can be heard more prominently. The title song of their album, « Simnadé », means "listen", and I have nothing to add to that! It is a pity that the album is difficult to find nowadays, even in digital form.

The couple performed together at various occasions in the Casamance until the late 1990s, the time they divorced. Pascal remarried and continued to perform with his new wife, apparently with less success [1]. Since 2003, Sona Mané is part of a group called Njama Naaba and she continues to perform [1]. Pascal Keno Diatta died in 2017. 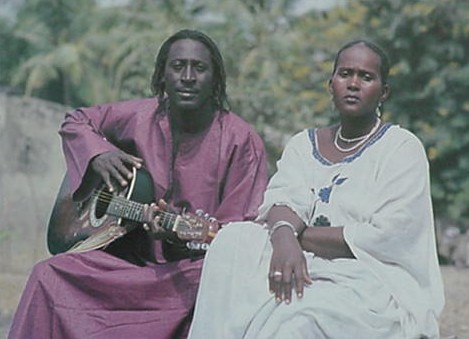