Biography
Pape & Cheikh are making music since about 25 years. After years of struggling, an international record deal in 2002 and a tour with Tracey Chapman early 2003 made them known to a much larger public.

Both grew up in Kaolack, a central town in the Sine region, home of the old Serer kingdom. They were close friends since their childhood. After he had left school, Pape Amadou Fall went to Dakar to work as a tailor, but after some time he returned to Kaolack to work in a batik-printing project. Pape stayed for seven years on the batik project in a sérèr village and got interested in the sérèr culture and music.

In the meantime, Cheikh Coulibaly pursued his law study. After a few years, frustrated about his law studies, Cheikh joined his friend in his research on traditional sérèr music.
After a period at the Dakar conservatory, Cheikh started playing bass in Ouza's band, and Pape joined Santamuma, a group making traditional sérèr music combined with western hits, predominantly performing for tourists in hotels. In 1997, Pape & Cheikh started to perform together as a duo, two years later they signed up with Jololi, Youssou N'Dour's label, although only in 2001, a first cassette came out. It was election time in Senegal, and the song « Yatal Gueew » (widening the circle), a plea for tolerance and unity, was adopted by the leading opposition candidate Wade as the official campaign song, and later 24 out of 25 participating political parties followed. The song had an important influence on these elections that led to political change.
After a concert in London, they were invited to record in the Real World studio, which resulted in the international release « Mariama », only a year after their first album.

After a long time Pape and Cheikh come back with a new album in 2011, « Yërmënde » (also referred to as Yermande) with the breathtakingly beautiful title song, with an extraordinary vocal featuring by late Pape Mboup. 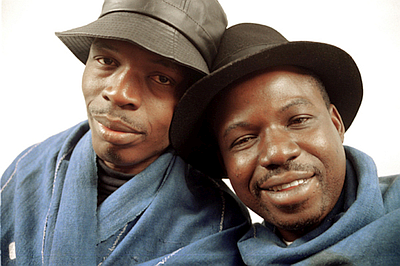