Biography
Ndongo Lô, had difficulties entering the music scene. One day, during a concert of Papa Ndiaye Guéwel, he went to the podium and started to sing. He was contacted later to sing one song on Papa Ndiaye Guéwel's next album. At that time, he was poor and ill-dressed, but as soon as he started to sing, everybody was quiet. Although his father Mbagnick Niang refused that he engages in music, he couldn't be stopped. In 2000, he recorded his first album « Ndoortel », only released in Senegal as a cassette. The success was immediate, and Ndongo Lo toured in Gambia and did some concerts in Europe.

His 2003 album « Tarkhiss » was also released on CD and he became well known in Europe as well as in the United States. In December 2004 he released a third album « Aduna » (Life). Already very ill, he sang about the way he looked at life and about thanking friends and religious leaders (Ndongo Lo was a follower [talibé] of Mouride leader Serigne Fallou Mbacké). Because of that, Ndongo was called Mou Serigne Fallou Niang. The album was recorded with the band he had created, Le groupe Jamm. The band continues to perform and promised to publish yet unreleased songs written by Ndongo Lo.

On Friday, 14 January 2005, Ndongo Lo performed for the last time. On stage in a night club in Dakar, he felt ill and vomited on stage. He was brought into hospital. On Sunday, he asked his mother-in-law for a soup, his favourite meal. He ate the soup in company of his wife and his manager, and shortly after that he died in his wife's arms.

Ndongo Lo had become very popular among the people of Pikine, a poor Dakar suburb. this was because of his free speech and the fact that a young singer of a poor family and from a poor neighbourhood could rise from misery and become famous, yet never forgetting his friends and fellow Pikine people. When he died, thousands of people in Pikine came in the streets refusing to believe that the rumour was true. Unfortunately, it was true... 200,000 people were present during the funeral ceremony in the holy town of Touba. 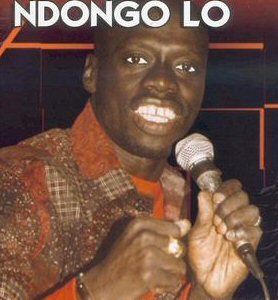