Biography
Djanbutu Thiossane is an ensemble, founded in the late nineties by three brothers who are originating from the Senegalese town of Louga. One of these brothers, Ass N'Diaye, came to Spain in the early 1990s, at first selling African handicrafts on the street. Later, he started giving Djembé classes to earn a living. His brothers Baye Mass and Pap joined him soon.

After having performed on concerts as well as during studio recordings, the three brothers founded Djanbutu Thiossane, joined by other musicians from Senegal and Gambia. « Ass, Mass & Pap » is their first album, released in late 1998.
In 2002, a second album « Fass » was released, that was recorded in Dakar. In 2005, a third album came out, with limited distribution. In the meantime, the N'Diaye brothers continued to give djembé classes in Madrid and elsewhere in Spain. 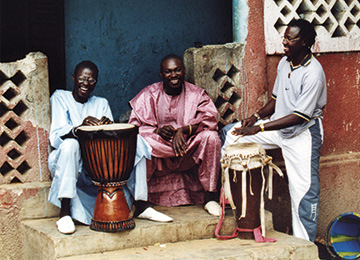