Biography
Daara-J has been formed by Faada Freddy (MC), Lord Aladji Man, and N'Dongo D. The name of the band stands for "school of life" (Daara means school in Wolof language).

Among the hundreds of rap and hip hop bands in Senegal, the music Daara J has a distinguished style, putting the melody on the forefront. Their albums show a variety of styles, such as soul, funk, dancehall and even Cuban music. They sing in Wolof and in French, on their African cassettes the lyrics are mainly in Wolof.
Daara-J have a message that they want to be heard. The lyrics address issues such as religion (a hot and delicate item in Senegal!), immigration, egoism, and the antagonism between technology and human well-being.

Their 2003 album « Boomerang » is an important release of world class standards, and may convince any music lover even when not specifically interested in hip hop. Featuring rapper Disiz La Peste, Sergent Garcia and Malian diva Rokia Traoré are decisively adding value to the album.

Faada Freddy and N'Dongo D separated from Lord Aladji Man, and the former two founding members continued under the name of Daara J Family. They continued to perform together and recorded new songs. A new album « School of Life » has been released in 2010. In 2016, the album « Foundation » followed, and a new album « Yaamatele » is released in January 2020.

Faada Freddy also performs and records as a solo artist, he recorded an album in 2015 called « Gospel Journey ». 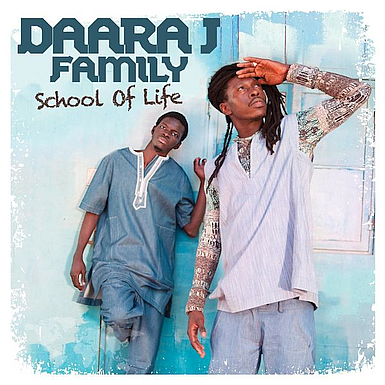