Biography
Adiouza, born Adji Kane Ouza Diallo, followed in the foot steps of her father, the much respected Ouza. It was her brother Cheikh Lô Ouza Diallo, singer and keyboard player, introduced her into jazz and who took her to various Dakar clubs such as Le Méridien, JUst4U and l'auberge Marie Lucienne. The manager of the latter inn, Ousmane Diop helped her to produce a first demo song. But her father Ouza designated her to be the intellectual of the family and go to college. After her schooling in Senegal, she started a study Ethnology-musicology in Paris in 2004. She also learned to read musical notes, piano, drums and guitar at the conservatory of l'Hay-Les-Roses, not far from Paris.
In Paris, Adiouza met bassist Samba Laobé N'diaye of the band Missal and he introduced her to the Paris music scene. She started to sing at a Paris bar (cabaret) Les Trois Maillets until 2007. Through the great Cheikh Tidiane Seck she met other singers, for which she worked as backing singer. In 2008, she finished her studies in musicology and she recorded her debut album « Maadou », arranged by her brother Cheikh Lô Ouza Diallo and produced by Ibou N'dour. Impressive song is a remake of George Bizet's Carmen (at least a part of it), as a hymn to the freedom of choice for African women, Adiouza further sings on this album about tolerance, respect and open-mindedness. 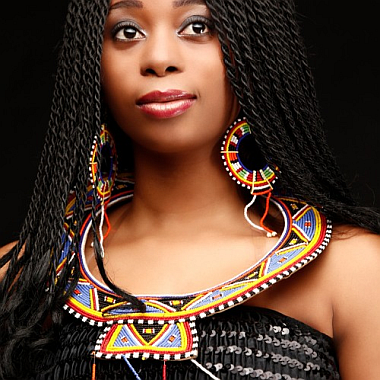