Biography
The band Tal National was formed by Hamadal Issoufou Moumine also known as Almeida in 2000. Almeida had already a successful career in football behind him, and is also active as a judge in local courts and as an ambassador for SOS Orphan Foundation. He is now guitarist and band leader of Niger's most successful outfit. He leads an energetic band that plays five nights a week, for sometimes up to five hours! Halfway, the musicians are being replaced, even in the midst of a song the drummers swap without missing a beat. Of the thirteen members of Tal National, only six or seven would play at the same time, to be replaced after several hours playing by the remaining musicians.

Their songs are partly original compositions or reworked traditionals, based on Songhai, Fula, Tuareg and Hausa folklore. In 2006, a first album, « Apokte », was recorded, and it was well received. As recording facilities in Niger are near to absent, Almeida looked for a way to improve the recording quality and asked Chicago-based recording engineer Jamie Carter to come over to Niamey. This was cheaper than flying the entire band to Nigeria or Ghana in order to record in a modern studio. With the result, the album « A-Na Waya », Tal National reached the top in Niger's national music landscape.

In 2011, Carter came over to Niamey in order to record a new album « Kaani » in the run-down studio Maibianigarba. He managed to get his equipment working, where most of the studio equipment was broken and covered with dust, and the album was recorded during daytime, after that the band would perform at night. It shows the energy of the band, in a country where everything seems to work against artists. As distribution is very poorly organised in Niger, the band members sell their albums on the city's roundabouts!

The endeavours seem to pay back, as Tal National signed to FatCat Records in April 2013, and this resulted in the same year, in a first international album release as well as a North American tour in September. 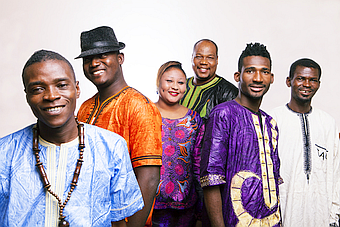